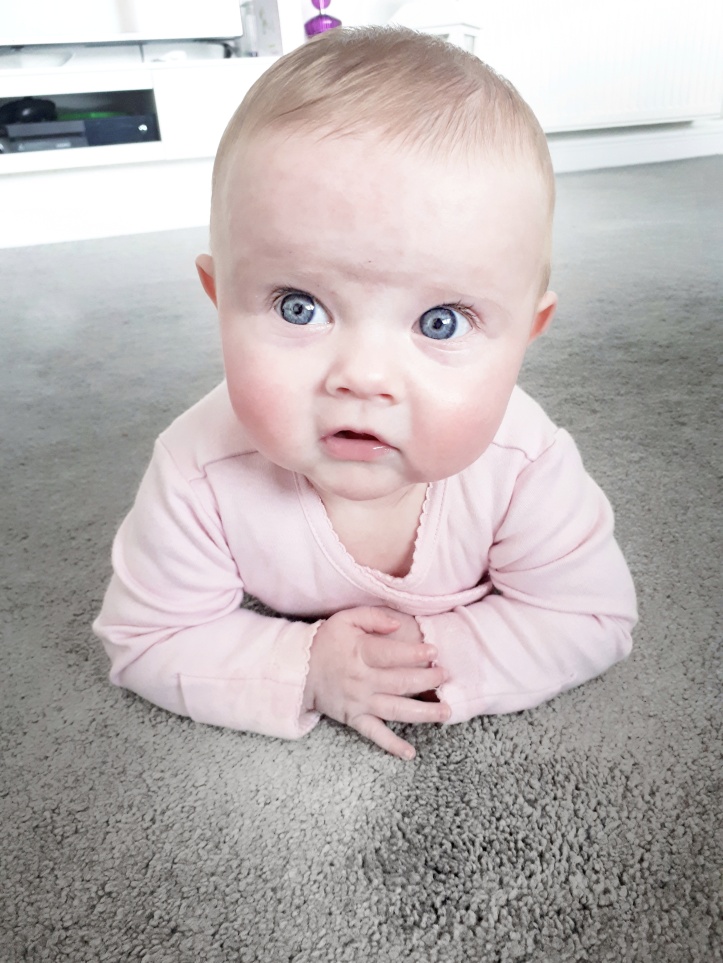 So, this whole ‘she’s reached 6months, I’ve finally got my shit together and winning at mum life’ thing?
…..It lasted a week.
Whyyyy though?!
I was loving the fact that she was sleeping well, napping well in the day, feeding like a pro and seemed like a happy and chilled little baby for around 90% of her day.
Seriously though, why is it that every stage of having a child is potentially more stressful than the last?! Do they keep it a secret so that the human race survives?!
Don’t get me wrong, she’s still a really happy and chilled baby these days, but I’m pretty confident that she’s happy so much of the time because she’s LAUGHING at the state of me, freaking out about stupid things such as when to give her food in the daytime.

As most of you probably saw from my Instagram posts, I had a tiiiiny meltdown over weaning. It was going to come. I mean, I’d been worrying about various different parts since we’d started a little while back, but I’d managed to keep most of these to myself (sorry laura, you deserve a medal for putting up with various baby food related questions!)
However, she seemed to be absolutely nailing the weaning at the start of the week – enjoying the food I was giving her, taking decent amounts and managing well with finger foods. You’d think this would all mean that I could sit back and relax, right?
WRONG!
We had a rough night at the start of the week – she was up a few times in the night crying which is VERY unlike her. I’d put it down to a sore tummy as I’d fed her three different meals that day. I’d gone with what I felt she could cope with as she had been managing so well but it was obviously too quick a jump considering we’d not long started. So with this in mind, it wasn’t long before the panic and tears set in:

How often should i be feeding her?
Before bottle/mid bottle/after bottle?
Should I be cutting out any bottles at this stage?
WHAT IF I’M FEEDING HER TOO MUCH?!!

Thanks to a few close friends and a lot of lovely folk in the insta-community, I managed to put the biscuit tin down and gather enough advice that related to our weaning journey and put a plan in place.
I think my main problem was that I was wanting us to run before we could walk. We’ve gone back to basics – focusing on tastes and textures before building on that.
We’re doing two meals a day, breakfast and dinner – choosing two different tastes and keeping with them for 3days before mixing it up a bit. I give her a small portion (about half a weaning tub portion) and give her it after her bottle. This works for us as some foods are going to trigger olivias reflux. Therefore by staying with the same foods for a few days, it allows us to pinpoint which foods are triggers. I also give her foods to play about with and she seems to love holding her own food and being in control of what she tastes and eats. She also likes to test out some foods as shampoo, and also likes to add new food decoration to her clothes and my carpet. She’s nothing if not creative…..
Long story short, I feel a LOT more in control of our weaning journey now and look forward to trying the different foods and playing about with it all. I’m no longer focused on cutting out bottles and feeding her too much. We used to give her 5 bottles of 7oz a day and she’d ALWAYS leave an ounce. So we cut it down to 4 bottles of 7oz a day and she demolishes them all. So until she gives us an indication that she doesn’t need as much, we’ll continue this way.
I bloody love a chubby baby anyway…..

As I mentioned earlier, we had a rough night at the start of the week. Although I’d put it down to a sore tummy, we had another ropey night the following night too. For a while now, Olivia has been waking in the night – not for any particular reason as such as all I’d have to do is reach over and put her dummy back in and she’d settle off to sleep. Although I was never having to get up with her, it was still disruptive to both of our sleeps as it was happening as often as five times a night some nights.
A few people had suggested moving her into her own room which I was a bit reluctant to do. Partly because I didnt feel she was big enough (not until she was 7 at least….) but mainly because at this point, getting up five times in the night to traipse all the way to her room, just to stick a dummy in, would get really old, really quick. I’d discussed it with my mummy friends at one of Olivias baby classes and one of them had said that she had been through something similar and found that her daughter was up much less as she wasn’t getting disturbed as much and she felt that her daughter was just doing it because she knew her mummy was right beside her and wanted a little bit of attention in the middle of the night. Mad, but they’re clever little things so they are, so I could believe that. Another friend who suffers from ‘dummy-gate’ made the change this week and she said it was definitely a positive change. So this, coupled with the rough couple of nights was enough for me to give it a shot.
After 342 arguments with myself and 12 ‘let’s just do it tomorrow’ comments to my husband, we settled her into her big girls cot.
Absolutely no tears (from her….🙈🙈) and self settled to sleep straight away, which hadn’t happened in a while. I didn’t believe it could be this easy.
But apparently it was…..
We’re on the fourth night tonight and the last three have been amazing! Only one dummy wake up and sleeping 11 and a half hours.
Of course, I’ve not fully benefited from it yet, as I spend far too long glued to the baby monitor, just watching her sleep. But it’s something we undoubtedly will in the near future and something we probably could’ve done sooner.
The benefit of hindsight though, right?!