This week, I’ve had one of those weeks where, it’s really hit me, that Liv isn’t a tiny baby anymore.
It’s pretty much a given and hugely obvious; but any parent you ask will be guilty of not realising how much (or how quickly) it’s happened.
When people ask me how old my daughter is, my answer just rolls off the tongue, as if on autopilot. But, if I really took the time to stand there and actually think about the fact she’s almost 9 months old, it’s really scary. She seems to be growing by the day, her personality is really developing now, and shes learning all these new and incredible skills. But the scary part is that the time feels as if it has just completely disappeared….. One minute I had a beautiful, tiny, forever-sleeping newborn, next, I seem to have blinked, and I now have a (very) wriggly, sleep-resisting fully fledged baby. One who is SO close to being on the move…. 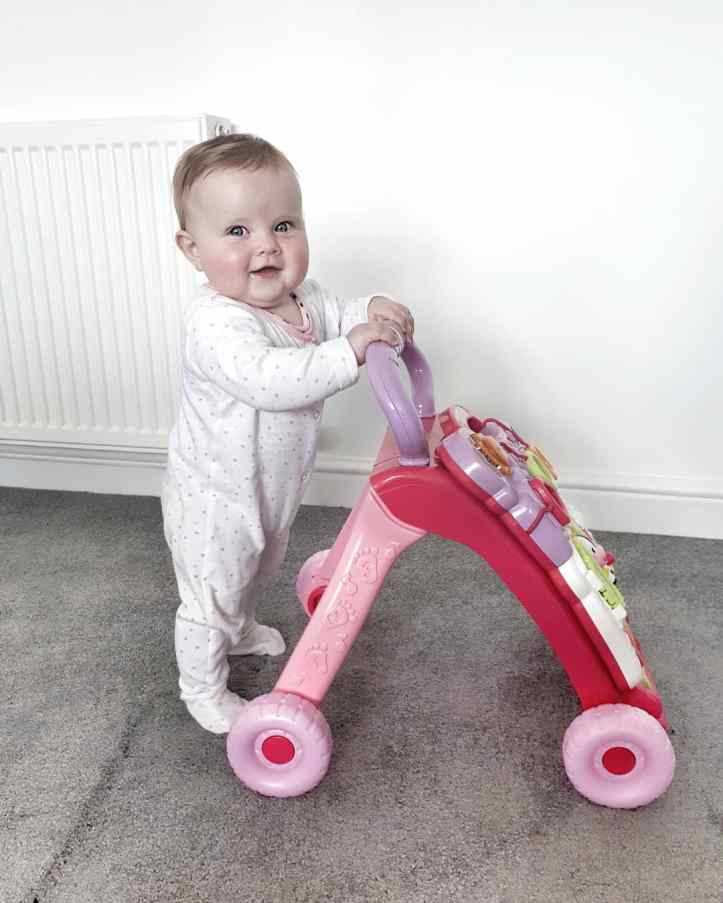 Anyone who has followed this blog for a while now, will know about our reflux hell. Without going into too much detail about it (if youre really interested, pretty much every single one of my December blog posts talk about it in some aspect) it was utter hell. After every bottle, she’d vomit so much and be so sore, that one of the only things that would help her would be if we bounced her or burped her while standing up. She would arch her back, and contort her body into the worst looking positions, obviously just to try and relieve herself of the pain….. It was bloody awful to watch. The positive part however (Yes, I have to dig REALLY deep for the positive part) is that she has always had strong legs from it. This, coupled with intense ‘jumperoo training’ (how good would an adult version be for toning our legs?!) has led to this little lady only ever being happy on her feet….
She has stood and held on to furniture for a good while now, so I thought we would give the walker a little try. The first few attempts were exactly how I imagined – face plants galore! But she was really keen to get back on to it. After a few days of attempts, she was standing steady. I couldn’t believe it! I was super proud that she’d managed it!
So you could only imagine the state of me when she took a couple of unsteady steps forward (followed of course, by another epic face plant) with the walker!
I had imagined she’d probably be on her feet quite quickly but never in my wildest dreams did I imagine she’d take her first step at 8 months!
Only learnt to roll a couple of weeks before, no sign of crawling and not even a glimpse of white in her gums. Yet this, she has nailed.
Bloody typical! I better make the most of her being stationary before she’s properly off!

As if that wasn’t eye-opening enough to our little baby growing up, we had her first nursery visit this week. I knew it was pretty mental finding childcare but I had no friggin’ idea of how mental it was going to be. I’m really lucky in the fact I’ve managed to take a year off work, so I’ve always put it to the back of my mind. I’m even luckier to the fact that when I go back part-time, I have family that can help out with childcare, meaning that I only need to look at childcare for one day. I was probably pretty naive in thinking that would make things easier….
We originally fancied going down the childminder route but I may as well have used my energy (and had more success) finding that damn needle in the haystack. Turns out all the good ones book up well in advance. And we’re needing one for November, so I’m talking months in advance.
After discussing the childcare issue with my ‘baby class’ mum friends, I began to realize I’d left this pretty late for ANY childcare. Cue the mild panic.
Fortunately, we managed to get in touch with a couple of (good) nurseries and arranged visits.
We got a really good impression off of the first nursery visit, really friendly and nice environment with a good range of activities/meals, so I was happy. We even popped Liv into the baby room as we finished the tour, and when we returned, she hadn’t even noticed we’d gone, which was really reassuring. We’ve still to see the other one but it’s put my mind at rest a fair amount in the meantime.
It’s a horrible feeling knowing you’re going to have to leave your baby soon and you want to know they’re in the best hands. It’s such an anxious time and I want to thank those mums that got in touch regarding the nursery and gave me really good feedback, it was another amazing example of how good a support network you can have via social media.

It’s been amazing spending some time in the sunshine this week. How much more difficult does a sunny day become when you have a baby though?! ‘What is appropriate clothing?’
‘How shaded do I have to keep her?’
‘Has she drank enough water?’
‘Has ANYONE successfully sun-creamed an infant without covering their entire self and surroundings in it!?!’
It’s an absolute minefield at times, and that’s with Scottish sunshine, god only knows what you mums in the South have to cope with! Thankfully, Liv has started taking water really well – something i was previously really worried about! I ended up putting a tiny bit of sugar free diluting orange juice in one day, which obviously appealed to her a LOT more as she demolished the cup. I did this a couple of times then just switched back to water. By this point, she knew what to do with the cup and drinks out of it really well. Unfortunately, i still have to hold it to her mouth, otherwise it gets swung about the air or used as a hammer, but baby steps an’ all that.
Either way, we’ve managed up til now to avoid sunburn & dehydration so let’s hope we can continue to succeed, and the weather is here to stay.