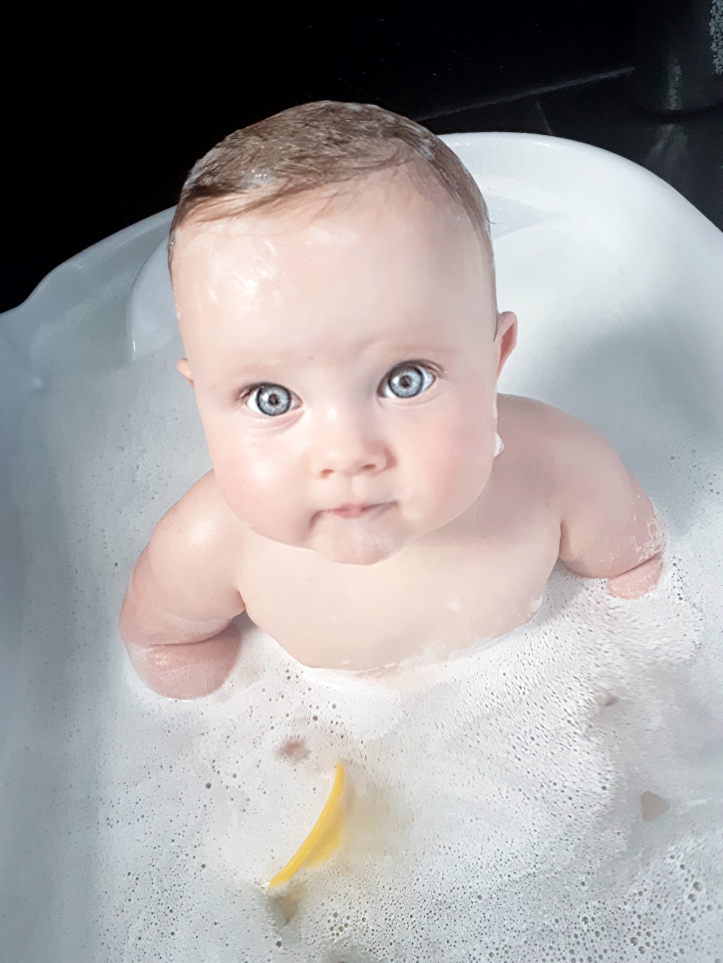 This week, firstly, i’d like to thank everyone for their lovely messages and comments in response to my blog last week – and in fact, every week. It means such a lot to receive them and often they either make me feel a million times better or provide me with great advice on tackling the issues that I have.
Last week, there were so many of you that felt similarly in terms of their babies development – often feeling like they were in some kind of ‘race’ that at some point, all of us will stumble in and never win. One mum said to me that one day, it’ll be like a switch is flicked, and they go from not being able to do something, to suddenly mastering it….
And has liv not went and proved it this week?!
Well, not quite, but seriously close.
I’ve said a few times before that Liv has never been interested in learning to crawl, much preferring to stand up and focus on that. Whenever we would put her on her tummy, she would just lie there until she would get so frustrated, she’d cry for us to turn her round or she would roll back over herself when she finally learnt how. Something must have eventually ‘clicked’ with her though, as recently, whenever she was on her front, she would wriggle and TRY to move but she just wasn’t grasping the concept. She would often lift all of her limbs up in the air and it was like she would almost try to ‘swim’ to get moving. It was adorably funny – until she got the rage. This went on for a while and she just never progressed from this point.
This week though, while on her front, she managed to very unsteadily at first, push herself up into full crawl position – knees AND hands simultaneously on the floor. She then started rocking back and forward before giving up and falling to the floor. Although not managing to move yet, the fact that she just mastered that position in a day gave me a bit of a sharp reminder at how fast these babies DO learn and that I really need to child-proof my house, pronto! I’m betting she’ll be on the move in the next week or two, which will no doubt bring new meaning to the word exhaustion!

Speaking of exhaustion, we had the worst night we’ve had in a loooong time. I’ve spoken about restless nights before but normally when Liv wakes in the night, it’s purely for her dummy (annoying yet easily resolved) that she’s flung across the room. But this time, she woke up crying. Proper crying, with real tears and all, before midnight. I hadn’t even been to sleep yet (thanks Love Island, you addictive little rascal) so i was keen to settle her as quick as possible. Popped the dummy back in as usual, but instead of settling her, it seemed to make her worse.
So she continued to cry.
And cry.
Crying through teething gels, paracetamol, being stripped (hellooo heatwave) having her nappy changed…. I tried everything. The only time she’d settle was when she was in my arms. Which just isn’t Liv – she’s firmly in the ‘no touch camp of independent little Divas.’
On and on it went until i ended up giving her a bottle, which is something I’ve never done, nor has she required, since she was about 13 weeks old.
She demolished said bottle (obvs) but continued to cry…
At half 3 in the morning, I’d tried everything so thought I’d pop her back in her cot for a 10 minute breather and see how it went….
She ended up back asleep 10mins later.
I on the other hand saw 4am before I must have blacked out. Of course, little madam was up half 6, bright as a button as usual.
That was a ‘matchsticks in the eyeballs, coffee on drip’ kinda day. Thankfully, that hasn’t been repeated and she’s slept well since then.
Is she a little rascal? Or was it genuinely the heat/teething/both combined? Anyone else have a night(s) like that this week?!

We’ve had another development on the weaning front recently – another bottle has been dropped, which means she’s down to just a morning and bedtime bottle. A few weeks ago, she kept turning her afternoon bottle away, to the point where we just stopped offering her it. A few days later however, she made it VERY clear that she still needed it (the hanger was so, so real) so we started giving her it again. I know there is different advice out there regarding how many bottles a baby should be getting at certain ages, but I decided (after the 57628th piece of conflicting advice) that I’m better off just following Olivias lead…
It wasn’t until a couple of weeks ago that she started losing interest in it again, that I trialed it for the second time, and it’s stuck. She’s never looked for it again and I just make sure that she gets a decent mid afternoon snack.
Of course, the paranoia comes in BIG TIME when you remove a bottle….
‘Is she getting enough food?!’
‘Will this distort her routine?!’
‘Is she too young to be cutting ANOTHER bottle?!’
I’m giving her three meals and sometimes a fruity dessert, along with a morning & afternoon snack, so short of upping her portion size, I doubt she could actually be given any more food. So I try to silence these doubts by being rational (not easy when you’re sleep deprived) and sensible. I’m so lucky that she’s not fussy and she’ll eat pretty much anything I put in front of her (just like her mum, sorry pet) so I at least don’t have that worry to contend with, just the starvation issue, ahem.
But seriously, it never ends does it….?!