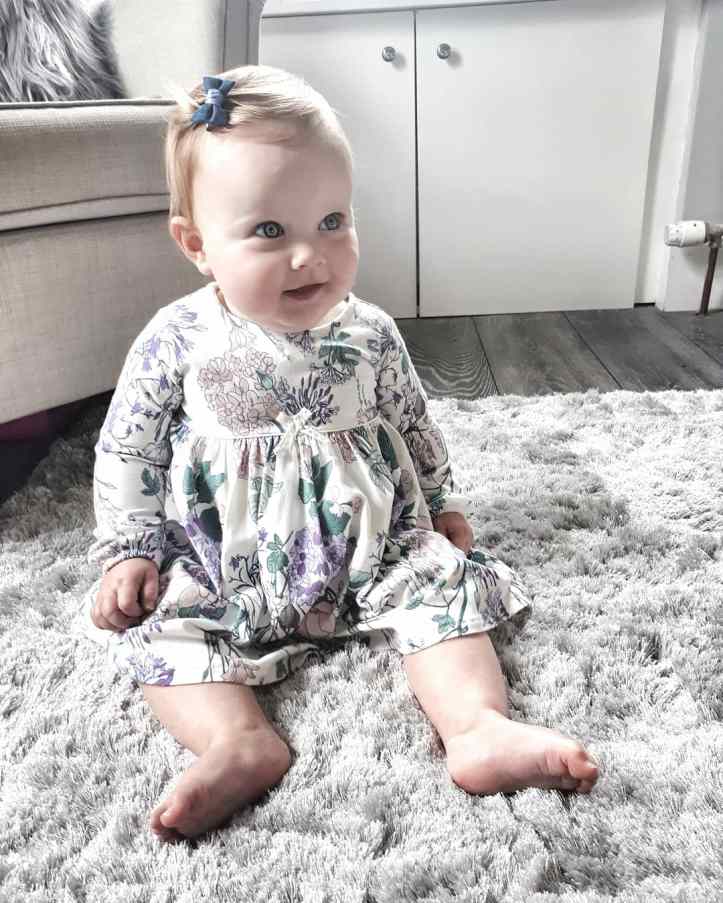 I’m slowly beginning to figure out these days that my daughter likes nothing more, than to make a liar out of me. No sooner have I said something about her, she’s doing the complete opposite – whether it be napping well, sleeping through the night or eating like a champ.
This week, she decided that she would quite like to master crawling – after relying on bum shuffling, commandos ans backward crawling. Its probably been in the pipeline for near enough month, yet everytime I reckon she’s away to do it, she either gives up, face plants or face plants and then gives up. So OF COURSE the moment I publicly out myself and tell the world of Instagram that she’ll walk before she crawls, she spends the entire week proving me wrong.
And she only went and bloody did it!
Although I am immensely proud, obviously, I’m also pretty shocked as I just never had it in my head that she would actually crawl. But there we go.
She’s still at the very early, shaky stages and you can see she is literally doing it so she can reach for things she shouldn’t be – I’ll often put objects in front of her, enticing her to crawl, which shell do, but only the VERY bare minimum before she lies down and stretches her arm out to grab said object. Whether she knows it’s because her arms aren’t quite strong enough to hold her for too long yet, or whether she’s just plain lazy, I guess only time will tell…..
As for making a liar out of me, I’m gonna go right ahead and state that I think she’ll be an absolute nightmare cutting her first tooth.
Hopefully it works that way too… 😉 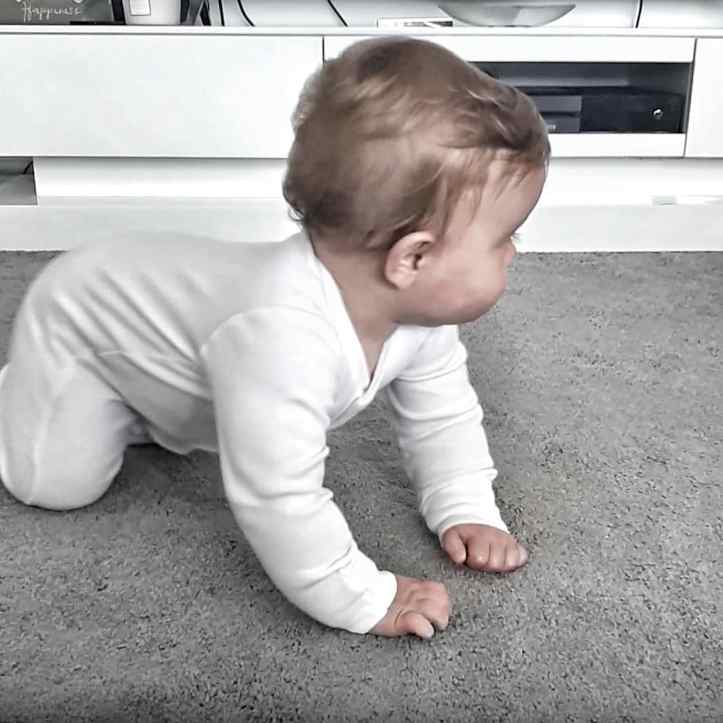 This week also saw Liv with her first proper cold. It was 100% on the cards as we had a ‘beautiful’ moment on the Monday in which her baby friend (who was riddled with the cold) pinched Livs dummy and stuck it in her mouth, only for Liv to pinch it right back and obviously stick it back in….. all before us mums even realised. Her mum was horrified but in all honesty, I’m glad she’s had some sort of exposure as it’s a matter of weeks before she starts nursery and gets hit with approximately 6475859 bugs.
Considering we were told she may have a slightly weakened immune system due to her being a little bit early, I had expected a bit of a rocky road at times, so to make it to 10 and a half months without so much as a sniffle, was VERY good going.
To be fair to the little mite, apart from her nose running like a fountain, and her coughing over every single meal I’ve eaten in the last few days, she’s not suffered too badly. She was pretty miserable for a day during the week – in which she cried if I so much as moved an inch away from her, but thankfully seemed to be right as rain later on, and full of smiles by the time her daddy got home (seriously, what is with that?!)
Her sleep also hasn’t been too interrupted (despite sounding like Darth Vader through the monitor) and neither has her appetite, which are definitely the saving graces. A couple of people mentioned that it may also be teething related, so I’ve been keeping my eye out for a little pearly white, but alas, nothing yet! 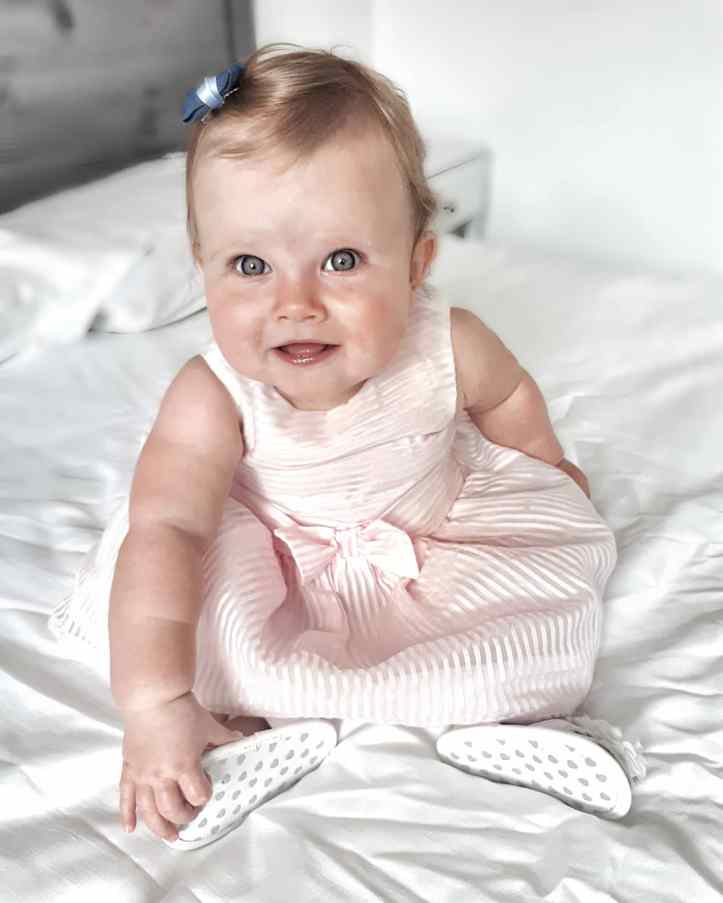 Obviously I didn’t get a chance to post last week; as many will have saw on my Instagram, I was enjoying myself at my little guide-daughters naming day. It was an amazing day for a special little girl and her parents did her proud. There’s less than three weeks of a difference between Charlotte and Olivia and by having them so close together, it has allowed us mums to support one another from the get-go. I cannot emphasise enough how important it was for me to have someone who was in a similar boat, that I could talk to (day and night) about the highs, the lows, the never-ending worries and just our general daily nonsense. I think you could look back at our messages from the newborn period and the vast majority of them would start with ‘is it normal for…..’ and include some sort of reference to baby poo – sometimes with an added picture to really get our point across.
They say it takes a village to raise a baby, and I reckon that’s true. MY village, although grown considerably smaller in population this year, ranks VERY high in quality. Those who have truly been there to support, give advice and a good kick up the ass when I’m being REALLY ridiculous and those who have not only taken the time for me but got to know my daughter too…. they know who they are and I hope they feel that I’m there for them as much as I KNOW they’re there for me.
Plus, it kinda helps if not only do they not judge me for eating an entire packet of biscuits over the course of a night, but that they did exactly the same thing only the previous night before…. 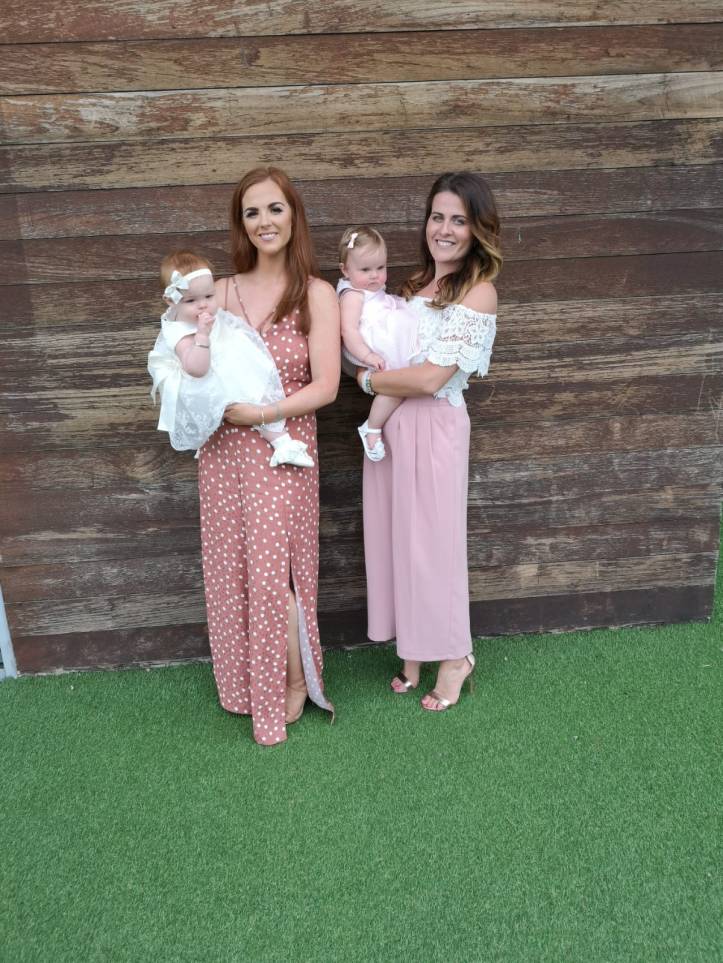