Holidays…. With a toddler.
Definitely not for the faint hearted.
Or, at least, ours certainly wasn’t. 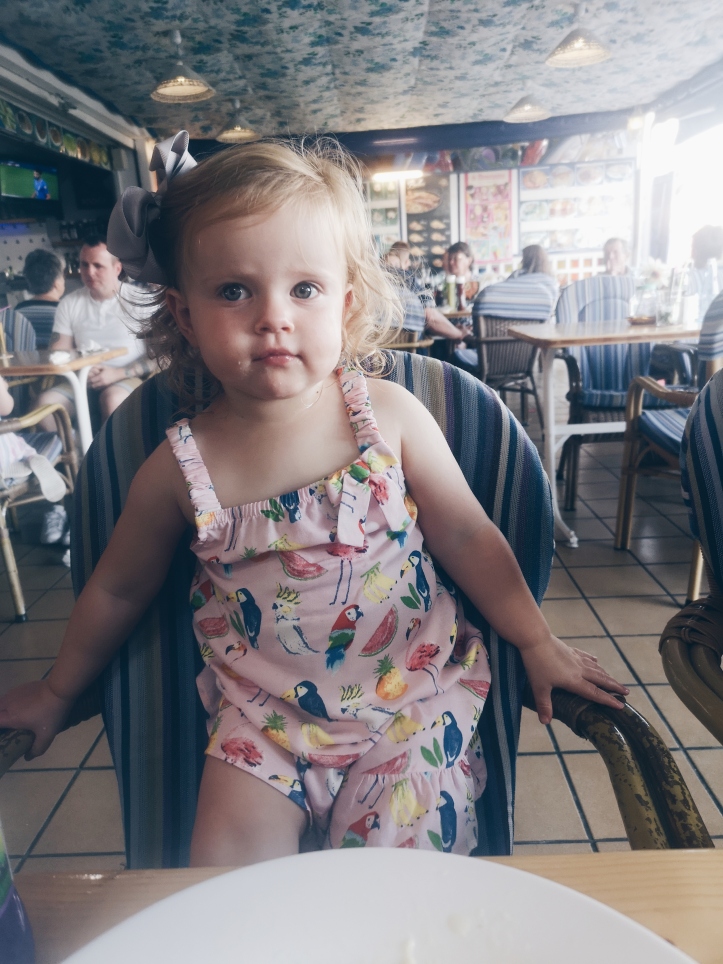 Having put off holidays abroad prior to this point in time, (partly financially motivated, partly bravery) we’d discussed the idea recently and decided to book up with the intention of enjoying our first (and last) holiday as a three, whilst also making the most of the fact Liv still got included for free before turning two in October. We were SO excited and after doing our research, we opted for a family-orientated complex in Majorca. A huge selection of kids activities and entertainment, a fairly short flight and weather that wouldn’t be scorching hot in September, seemed ideal to us and perfect for Liv. Not inexpensive, but totally worth it in our eyes if it meant we could make the most of our time away.

Packing was a lot less stressful than anticipated, so it seemed that after a relatively stress-free preperation period, we were setting off for a great time away. We’d recently had a short flight to Belfast with Liv which had alleviated most of our flying fears with a toddler, and although this was over double the length of the flight we’d had previously, we’d come armed with snacks and distractions to keep her entetertained.
Thankfully the flight had a LOT of families and short of a few moments of tears/tantrums, we had a positive experience on the whole.

Probably our last positive experience of the whole trip…..
I joke.
Just.

Settling into our complex, it seemed amazing. The sun was shining, our apartment was spacious and there were so many things to see and do for kids that we naively thought liv would have an absolute ball running about…..
Whether it was to do with the fact she developed a pretty nasty cough and presumed ear infection from the flight over, that there was a change in her routine or that the heat was just too much, I guess we’ll never know, but she pretty much reverted into a newborn from day three onwards…..
She cried almost constantly when awake.
She slept for long, long periods in the day, and wakened frequently in the night.
She refused almost all food and meals despite us keeping her diet similar to a home.
We’d take her down to the pool area in which she’d have a splash about and then run around to the park area for a go on the chute, yet within the hour, she’d start crying again to go up to the room for either a cool down or a nap. Even on the dull, cooler days, she would still refuse to spend any length of time outside. Whenever we took her back upstairs, she’d walk towards her travel cot and would sleep for hours.

Of course, we tried what seemed like everything to try and help. We let her sleep to catch up, we capped her naps some days (cue screaming) we bribed her with ice cream/chocolate (not interested) and of course did we not forget to pack calpol (too sensible) so we even made the trek and managed to pick up some liquid paracetamol from the local pharmacy, which tasted disgusting and obviously led to Liv clamping her mouth shut or spitting it right back out whenever we tried to give her a dose.
It was exhausting.
And stressful.
And at some points on the holiday, we almost wished we were back home in our own environment.

It’s important for me to be honest about our experience and I hope it comes across as reality, rather than pure negativity. Although there were a good few high points in the holiday and we did have a day or two when we had so much fun as a family; for us, it was almost disappointing to have this ‘picture’ in our head of how the perfect first family holiday should go, only for it to be what seemed like the complete opposite. It was also quite difficult watching other families having the time of their life with their kids splashing about and having fun in the pool, wondering why my child was having such an awful time. Despite reminding myself constantly, not to compare and that I’m only seeing little glimpses of other families at the pool, I just wanted liv to be back to her happy, perky self and I felt almost responsible for taking her somewhere she just didn’t like.

Ultimately, there’s not a part of me that wished we never went away on holiday. Looking back, its likely she was unwell and Ryan unfortunately got hit with a similar viral thing right after in which it made him miserable and his ears were painful. So if it was what liv had, I can’t blame her and we were clearly just unlucky. Yes, it wasn’t ideal and yes, it was stressful – we’re still unsure whether to go full steam ahead and book another holiday fairly soon, on the off chance it was just because she was unwell, or whether we’ll give it a few years into she’s a bit older – BUT we did it. We’re prepared for the next time. And should it be a much more positive experience, then all the better.